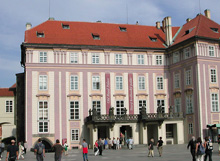 The Palace grew and gradually gained its present appearance from the time of its founding in the late 9th century. The original wooden building with a stone foundation wall was converted into a stone Romanesque palace by Prince Sobeslav in the early 12th century. Remainders of it have been preserved in the underground to the present. The palace was adjoined on its eastern side by All Saints' Chapel, which was consecrated in 1185.

In the first half of the 14th century the king and emperor Charles IV had a Gothic palace with a vaulted interior for state purposes and a band of arcades on its northern side built on the site of the Romanesque building. During the reign of his son Wenceslas IV two perpendicular wings were added and All Saints' Chapel was reconstructed.

The palace was deserted for entire eighty years of the stormy 15th century. After 1483 the king Vladislav Jagiello returned to Prague Castle and commenced the last large–scale reconstruction of the palace. The magnificent solemn Vladislav Hall was added to it and when designing it the architect Benedikt Ried combined the art of the Late Gothic with elements of the newly arriving Renaissance style. The perpendicular palace wing named after Vladislav's son Ludvik is also the work of B. Ried. After the succession of the Habsburgs to the Bohemian throne the interiors of the Old Royal Palace were used for coronation festivities and diets and as conference rooms, offices and depositories. New dwelling quarters were built to the west of the palace, in the southern part of the Castle complex. After the catastrophic fire which occurred in 1541 the Diet and All Saints' Church were rebuilt.

The Theresian Wing originated in the course of the reconstruction of the Castle in the 18th century. During the 20th century it has been subjected to several reconstructions. In 1993 it was adapted for an exhibition of creative art.