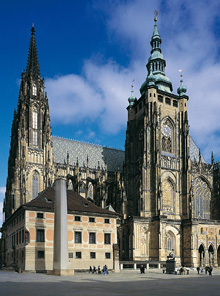 St. Vitus Cathedral is the largest and the most important temple in Prague. Apart from religious services the coronations of Czech kings and queens also took place in here. The cathedral is a place of interment of remains of provincial patron saints, sovereigns, noblemen and archbishops.

The cathedral is the third church consecrated to the same saint on the identical site. About the year 925 Prince Vaclav I founded a Romanesque rotunda here which after 1060 was converted into a basilica with three naves and two steeples. The importance of the cathedral grew especially after the establishment of the Prague bishopric in 973 and the founding of the body of canons – the St. Vitus chapter, which later became an important cultural and administrative institution.

In 1344 Charles IV began the construction of a Gothic cathedral. Its first builders, Matthias of Arras and later Peter Parler, built the chancel with a ring of chapels, St. Wenceslas Chapel, the Golden Portal and the lower part of the main steeple. In spite of the endeavours of some sovereigns to secure the continuation of the construction work the cathedral remained uncompleted for whole centuries. The main steeple was crowned with a Renaissance helmet and the music choir was built. The facade of the cathedral was provisionally closed. It was not until the latter half of the 19th century that the Union for the Completion of the Building of St. Vitus Cathedral began the repair of the original part and the completion of the building of the cathedral in Neo–Gothic style. The cathedral was solemnly consecrated in 1929. Its interior was subjected to adaptations even in later years. Visitors enter the cathedral through the portal in the western facade, opposite the passage–way between the Second and Third Courtyards of Prague Castle. Its bronze door is decorated with reliefs with scenes from the history of the cathedral and from the legends about St. Wenceslas and St. Adalbert.

The Neo–Gothic part of the cathedral consists of the main nave and the narrow side aisles, lined with chapels, and the northern wing of the transverse nave. The chapels have stained glass windows. The construction of the large southern steeple was started by Peter Parler, but he did not complete it. It gained its originally planned height after being provided with a Renaissance helmet in the 16th century. St. Wenceslas's Chapel partly reaches on to the area of the transverse nave. The different conception of its architecture and its magnificent decoration emphasize its importance as the central point of the cathedral as a whole. The solemn entrance to the cathedral, the Golden Portal, affords access to the chapel from the Third Courtyard.

Situated in the chancel of the cathedral, in front of the high alter, is the royal mausoleum below which, in the crypt, there is the royal tomb. The chancel is surrounded by a ring of Gothic chapels. Czech sovereigns and patron saints are interred in some of them.

St. Wenceslas Chapel is a cult centre of St. Vitus Cathedral. Its magnificent decoration and the different conception of its architecture emphasize its singularity as the central point of the cathedral with the tomb of the most important provincial patron saint. The facing of the walls, consisting of precious stones, and the wall paintings of the Passion cycle are parts of the original 14th–century decoration of the chapel. The scenes from the life of St. Wenceslas forming another decorative band are attributed to the workshop of the Master of the Litomerice Altar (the cycle is dated in 1509).

The door in the south–western corner of the chapel leads to the Crown Chamber in which the Bohemian Coronation Jewels are kept.