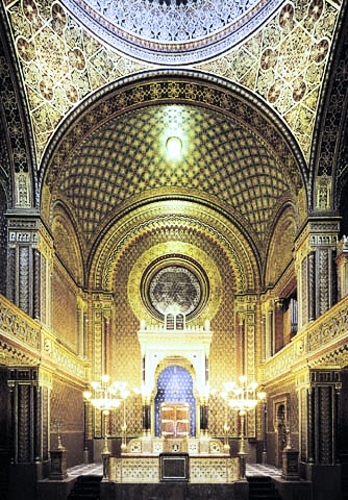 The Spanish Synagogue was built in 1868 on the site of the oldest Prague Jewish house of prayer (“the Old Shul”). It was designed in a Moorish style by Vojtěch Ignátz Ullmann and Josef Niklas.

The synagogue has a regular square plan with a large dome surmounting the central space. On three sides there are galleries on metal structures, which fully open onto the nave. The remarkable interior decoration features a low stucco arabesque of stylized Islamic motifs which are also applied to the walls, doors and gallery balustrades. The interior, together with the stained glass windows, were designed by architects A. Baum and B. Munzberg and completed in 1893. František Škroup, the composer of the Czech national anthem, served as organist here in 1836-45.

Permanent exhibition History of the Jews in Bohemia and Moravia – Part II covers the Jewish enlightenment and emancipation, the Austro-Hungarian Empire, the First Republic of Czechoslovakia, the Nazi occupation and the post-war decades.

Permanent exhibition Synagogue Silver from Bohemia and Moravia shows the representative selection of the more than 6,000 silver artefacts in the JMP’s collection.